The Top Things To See And Do In Luxembourg 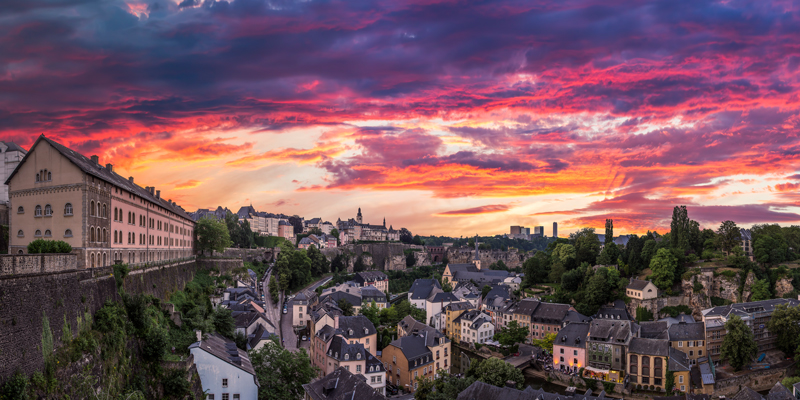 Small but mighty Luxembourg has only half a million people but one of the world’s most developed economy – several key organizations for the European Union are run out of Luxembourg City. It shares borders with Germany, France, and Belgium and is ruled by a Grand Duke, making it the world’s last Grand Duchy. Luxembourg has three official languages (Luxembourgish, French, and German), and the culture is a wonderful mix of Germanic Europe and the romance cultures. It’s a wealthy country with an even wealthier medieval history.  The heart of the country has been listed as a UNESCO World Heritage site and each region holds a ton of surprises for its visitors.

Also on the German border is Vianden, a quaint and hilly town on the River Our.  The two most striking features of the town are its old-world charm and Vianden Castle which stands high above the river. Built between the 11th and 14th centuries, the castle was a prominent home for Luxembourg royalty for hundreds of years before falling into ruin for almost as long. Restoration has been ongoing since the 1970’s and it’s once again returning to its former glory and now offers some of the most photogenic vistas in the entire country. Above the castle is a fantastic restaurant, accessible only by chair lift, which has the best views of Vianden and the surrounding mountains. Be sure to visit the Victor Hugo museum located in the house he once lived it.

The country’s capital is also a UNESO World Heritage site and major financial centre for much of Europe. You’ll want to spend as much time as possible in the old town and see the Grand Ducal Palace, the Cathedral of Notre Dame, Place d’Armes, Adolphe Bridge, and the underground defences popularly known as the casemates. But it’s not just historical beauty here; Luxembourg City is a thoroughly modern and cosmopolitan place that’s done an incredible job of merging history with modern progress. As an example, check out the fortress of Luxembourg that has been transformed many times over the centuries and now highlights the best of European culture.

The Land of the Red Rocks

This region gets its name from the red ore that drove the success of the Luxembourg industrial era. Known to locals as Terres Rouges, the area now combines new technology with ancient techniques to serve the current industrial needs of the country. Three trendy and fun cities make up the core of Terres Rouges:  Differdange, Esch-sur-Alzette, and Dudelange. You’ll find plenty of culture in each city that ranges from rock festivals, street theatre, and other concerts. You can visit Rockhal to learn how Luxembourgers gave a new face to this area and so changed the country. If you’re travelling with family, be sure to visit Parc Merveilleux in Bettembourg. Your kids will enjoy the monkeys, crocodiles, parrots, and more that the park showcases.

The Nature Park of the Upper Sûre Known as Luxembourg’s “water area” because of the 380 ha lake, Naturpark Upper Sûre is the model of sustainable tourism.  The park was awarded the EDEN prize in 2010 for commitment to integrating tourism, culture, social and economic development with environmental protection. If you’re looking to relax, this largely untouched land is the perfect place. You can join in a themed itinerary or go at your own pace as you like.  Most of the leisure activities are designed to highlight the region’s history, culture, and natural aspects.

In 963, Count Siegfried built a fortified castle on the Bock promontory, which was soon to become the cradle of the city. In the course of the centuries, on the western side, mighty ring walls were added, which, however, did not foil the Burgundians in their attempt to conquer the city in 1443. The best builder-engineers of the new masters (the Burgundians, the Spaniards, the French, the Austrians and the German Confederation) eventually turned the city into one of the most powerful emplacements in the world, the “Gibraltar of the North”. Its defences were bolstered by three fortified rings with 24 forts, 16 other strong defensive works and a unique 23 km long network of casemates: these could not only shelter thousands of soldiers and their horses, but also housed workshops, kitchens, bakeries, slaughter-houses etc. In 1867, after the declaration of neutrality,the military withdrew from the fortress and during the following 16 years 90% of the defences were demolished. In 1875, the superstructure of the Bock, a tremendous construction, was razed. However, it proved to be impossible to blow up the casemates, without also demolishing part of the city, so the entrances and the key connecting galleries were sealed. In spite of this, 17 kilometres of tunnels remain, often on different levels and tremendous stairways penetrate up to 40 metres inside the rock face.